What was the first sensor network? Thinking back, I bet most people would guess the early demos by Berkeley and UCLA at places like the Intel Developer's Forum; the Twentynine Palms air-dropped mote demo; and Great Duck Island. These were all around 2002 or so. It turns out this is off by about 35 years -- the first bona fide wireless sensor network was actually deployed in Vietnam, along the Ho Chi Minh Trail, in 1967. It was called Igloo White.

I've been doing a lot of reading about Igloo White lately, and while most of the information on the program is still classified, there are a bunch of articles, books, and a few websites that provide some useful details. Igloo White was a system designed to use seismic and acoustic sensors to detect PAVN movements along the Ho Chi Minh Trail from North Vietnam, through Laos, and into South Vietnam (thereby skirting the DMZ). It consisted of wireless sensors, typically dropped from helicopters and aircraft. In all nearly 30,000 sensors were deployed during the war. (The image above shows an airman about to drop an Igloo White sensor from a helicopter.)

You can read much more abo 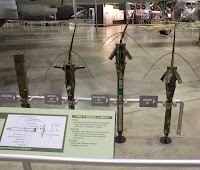 ut Igloo White elsewhere, but some juicy tidbits that caught my attention. The sensors themselves were shaped like large artillery shells and buried themselves in the ground, with a radio antenna designed to look like the surrounding jungle foliage. They used lithium batteries with an expected lifetime of 30 days. Each sensor performed simple local thresholding and triggered a movement alarm when a certain level of activity was detected. (All of this was done with analog circuity: at the time a digital computer was the kind of thing that filled a good portion of a room.)

The sensors would transmit a 2W signal on the UHF band which would be picked up by orbiting EC-121R aircraft that flew 24/7 on rotating 18-hour missions over various parts of the sensor field. The personnel on board would listen to the transmitted acoustic signals, and attempt to classify the targets. They could even identify specific trucks based on the acoustic signature of the engine. Detections were relayed to a top-secret SIGINT center at Nakhon Phanom, Thailand, where the data was stored by IBM 360 computers and processed largely by human analysts. The analysts would then call in air strikes against the targets. Note that in many cases the bombing runs occurred at night, using ground-based RADAR for bomb guidance, so the pilots never even saw what they were hitting. Presumably they could go from target to detection to, ahem, interdiction, in less than five minutes.

The most incredible thing about Igloo White was the sheer amount of resources that were poured into the program: the whole thing went from concept to reality in little more than a year, and cost more than a billion dollars. The system relied entirely on human analysts to interpret the sensor data, which was often noisy; later in the program the North Vietnamese became adept at spoofing the sensors. The number of people involved in deploying the sensors, monitoring the signals, and interpreting the data was almost inconceivable; the operations center in Thailand was the largest building in Southeast Asia at the time, complete with air conditioning, positive pressure, and airlocks to prevent contaminants from damaging the computers inside. This is not the kind of thing you're going to do with two grad students and a half-million in NSF funding!

The I-REMBASS system from L3 Communications represents the state-of-the-art in (deployed) military sensor networks. And, of course, much of the modern work on sensor nets came out of DARPA programs such as NEST. Still, it's fascinating to see the history behind this technology.
By Matt Welsh at January 21, 2010