Requiem for the Compact Disc 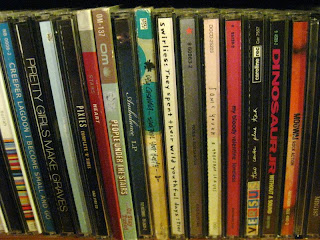 It's the end of an era. Today I packed up my entire CD collection (around 1,000 CDs) and stuffed it away in the basement, never to see the light of day again. I had them all on this glorious solid oak rack -- now for sale on Craigslist! -- that I needed to move due to some remodeling work that we're doing in the house. It's too cumbersome to move that many CDs and then put them back again, so I decided, today was the day -- no more CDs. So here is my euology for my Compact Disc collection. It has served me exceptionally well over the years, and I think it deserves a proper sendoff before being relegated, forever, to the dankness of my basement and the phantom dipoles of my hard drive.

I'm an avid music collector -- apart from the physical CDs, I probably have another couple of hundred albums worth of music in digital format alone. Although I have not bought CDs for more than a year (moving completely over to the Amazon MP3 store, and occasionally iTunes), there was always something comforting about having that big rack of CDs there against the wall, some reassurance in the physical presence of the media. Of course, the whole rack now fits entirely on an iPod. But having them all there there, bigger than life, an artistic statement, conversation piece at parties, something to thumb through... now it is all just bits, nothing tangible. Of course, we are talking about music here -- which is by nature ephemeral and invisible -- but the physical CDs were like the projection of that music sent to us from a higher dimension into our humble bounded universe.

Of course, I am not getting rid of the CDs just yet -- just boxing them away. I can't bring myself to part with them. There is something deeply ingrained in my identity with those battered and scratched plastic cases, the copies of Gish and Washing Machine and Dolittle that have been played countless times, discs that have followed me from high school to college, Europe, grad school, here to Boston... they are like old friends, and very much a part of who I am.

What I am most saddened by is that I haven't digitized all of them, and my biggest fear is that I will simply forget about some long-lost gem buried deep in a box in the basement... what if I never get a chance to rediscover that wacky Ween album? The Rahsaan Roland Kirk box set? My God, did I really forget to rip the Boo Radleys and the Dead Can Dance? Will these songs simply fade from memory forever? Without the glimpse of the CD cover, will nothing jog my memory back to that night in San Francisco when I first listened to Kid A while driving over the Bay Bridge? It's all too much.

First CD: Music for the Masses by Depeche Mode. Probably bought along with Appetite for Destruction by Guns n' Roses (I had a very confused childhood).

Favorite CD: That's easy. Loveless by My Bloody Valentine. A close runner-up used to be the Smashing Pumpkins' Siamese Dream until Billy Corgan's head expansion got in the way of him being able to write decent music.

Last CD: Mail-order copy of Swell's South of the Rain and Snow. My brother gave me a copy of Thom Yorke's Spitting Feathers for Christmas, which is pretty good.

Favorite record store: Tie between Amoeba and Rasputin's in Berkeley. I used to go there every other week or so and buy 10, 12 CDs at a time. Most of them I had never heard (or heard of) before, and many I only listened to once or twice. But not infrequently I would just discover something -- maybe based on the band name, or the album art -- that blew my mind. Interpol's Turn on the Bright Lights is a recent example of something plucked entirely at random from the bin (before they became popular, of course.)

Favorite online record store: Amazon MP3 store. Entirely DRM-free, all MP3 format, and a very good selection. It's rare I can't find what I'm looking for there. There's a free download manager that will automatically install new music into your iTunes library too.

Best music website: Pitchfork Media. Focus on indie music, very much in line with my tastes, with five detailed album reviews every day. Silly scoring system but anything rated 8.5 or higher I usually just buy (without preview) as long as it's not death metal or twee.
By Matt Welsh at February 25, 2009