Working for The Google 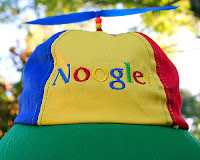 I am about to take a one-year sabbatical from Harvard to join Google. If you haven't heard of them, Google is this little startup company with this really neat website that lets you search for just about anything on the Internet. It is very cool.

I'm going to be at the Google office here in Cambridge (since I can't move my family right now) but expect to work with folks at the Seattle and Mountain View offices. This way I can also keep tabs on my research group at Harvard and hopefully keep things moving along here. But largely I am going to be stepping back from my academic responsibilities -- I intend to fully dive into the Google job and immerse myself in that environment.

A lot of people have asked me what I'll be doing at Google. I can't say much, but I will hint that it has to do with using high-energy lasers to digitize real objects into a computer system called the MCP. I am sure nothing can possibly go wrong with this project.

Seriously, I only have a vague idea of what I will be working on, but the high order bit is that my job title is simply "software engineer." Essentially, I'll be writing code. Not leading a project or doing "research" or anything like that. To be honest, this makes me extremely happy -- I miss hacking on a daily basis and look forward to being a grunt in the trenches, so to speak. As far as I can tell, this is how most people come into Google, regardless of their level of experience. Craig Chambers, who left a tenured position at University of Washington to join Google, told me that he came in as a software engineer, hacking on someone else's project, and it wasn't until he had been at it for a while that he started defining his own projects and leading his own teams.

The way I think of it, being in academia is a lot like building toy boats and playing with them in your bathtub.

Of course, this has many advantages -- you get to completely define the experimental environment, don't need to worry about aspects of the boat design that don't interest you, and can explore radically new designs without much concern for legacy approaches or "making money." At the same time it can get pretty disconnected from reality, depending on how you approach it.

Whereas being at Google is like working on an aircraft carrier at sea.


In my case, my job will be to polish the portholes on the poop deck, and I won't have much influence on the overall design or direction of the ship -- but hey, I'll learn a lot in the process. There is also something very attractive about writing code that will actually be part of a running system and potentially used by millions of people every day. Of course, I'll have to get used to things like writing tests and doing code reviews, and working under a vast number of constraints that we tend to ignore in academic settings.

Keep in mind I've never really worked as a software engineer. In a lot of ways I feel totally unqualified to teach my students about writing good code or building reliable systems since I've never actually had to do it myself. (That's not quite true -- the research systems I build are subjected to rigorous stress testing, but certainly aren't mission-critical the way Google's code has to be.) A stint at Google will hopefully make me a better programmer, system designer, and researcher.

I'm not yet sure whether Google is going to let me continue blogging while I'm there -- hopefully they will let me blog about non-Google-related topics, but we'll see. Maybe I just need a pseudonym -- if you see a blog pop up called "Final and Centralized" you'll know it's me...
By Matt Welsh at June 17, 2010