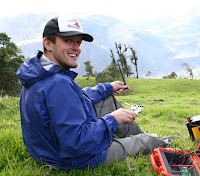 First of all, I'm very pleased to report that my student Geoffrey Werner Challen (formerly known as Geoffrey Werner-Allen, for reasons explained on his own web page) just defended his thesis! Geoff was the lead student on our work on sensor nets for volcano monitoring and developed the Harvard MoteLab testbed (used by dozens of research groups around the world). His work on Lance and IDEA defined new paradigms for resource management in sensor networks. He will be joining the faculty at the University of Buffalo next year and I am very proud of him. Congrats!

Second, I just posted the final version of our MobiSys'10 paper on Integrated Distributed Energy Awareness for Wireless Sensor Networks. This paper deals with the problem of configuring individual nodes in a sensor net to achieve some network-wide energy objective, such as targeting a given network lifetime. Each node generally has many local parameters that can impact overall energy consumption, such as the choice of parent in a routing tree or the MAC protocol duty cycle. We observe that nodes performing a greedy, local decision will often get it wrong; for example, a node deciding to forward packets through a parent with limited energy can rapidly drain the parent's supply. When energy harvesting (such as solar charging) is employed, it becomes very difficult to tune each node to achieve a network-wide objective.

The idea behind IDEA (sorry!) is to enable individual sensor nodes to make decentralized decisions about how to configure their own state. Nodes share information on their own battery level, charging rate, and energy load with other nodes in the network, using an efficient neighborhood broadcast scheme (akin to Abstract Regions). This information coupled with a utility function representing the intrinsic value of each possible state (such as a choice of parent node) allows nodes to make informed decisions that account for the non-local energy impact. In the paper we show that IDEA can significantly improve energy load distribution and network longevity with low overhead.
By Matt Welsh at May 13, 2010