The dumbing down of operating systems 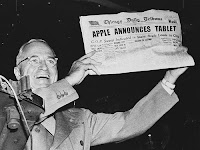 Yesterday's announcement of the Apple iPad -- basically an iPhone with a larger screen and no camera -- ushered in a new era for OS design. That is, an OS that was originally designed for a phone (the "iPhone OS", which is itself a stripped down version of Mac OS X), is now being ported over to larger, much more capable devices. I have no doubt that the iPhone OS will be very successful on the iPad. It would not surprise me to see it running on laptops and desktops in the near future. This simplified OS eliminates most of the complexity that makes people hate computers: the quagmire of configuration options, keeping up with upgrades, and of course the constant battle against viruses and malware. When I first saw the iPad, I immediately recognized that this is going to be the perfect computer for "non-computer users", like my dear mother-in-law, who pretty much only uses her Windows PC to read email and surf the web. (I'm not sure she's ever saved a file to the hard drive.) But it's also going to be the perfect computer for those of us who just want something that works. Like the original Macintosh, the iPad raises the bar of user-centric computer system design. It is elegant in its minimalism and simplicity.

Still, this trend of dumbing down the OS raises some interesting questions. The iPad OS lacks many features that operating systems have had for decades: multitasking, an open application API and development tools, multiple protection domains -- heck, it doesn't even have a proper filesystem. Arguably, it is this lack of features that makes the iPhone and iPad platforms so attractive to application developers and users alike. This trend suggests very strongly that the feature-rich, complex OSs that we love so much are going to look too baroque, top-heavy, and expensive to survive in a field where the "OS" is little more than GUI gloss over a pretty basic system. (Something tells me that in a few years we're going to get iPad OS v2.0 which builds in some of these "advanced" features that date back to the 1960's.)

Basically, what I'm saying is that the iPad would appear to make most current OS research irrelevant. Discuss.

(Update: Check out this petition that claims that the iPad's DRM is "endangering freedom." I'm not sure I'd go that far, but an interesting perspective nonetheless.)
By Matt Welsh at January 28, 2010