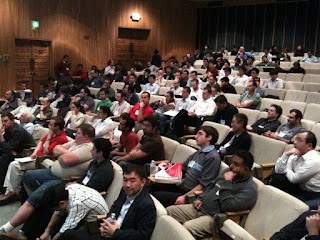 Last night at the organizing committee dinner I had the pleasure of chatting with Kris Pister, founder of Dust Networks and the originator of the term "smart dust". I got to pick his brains on the state of sensor networks in industry and the gap between academic work in the area and real-world demands. Kris had a couple of interesting comments. Dust Networks has made major inroads into wireless sensing for industrial automation and is behind the Wireless HART standard. He noted that academics are generally allergic to leveraging fine-grained time sync to enable TDMA and coordinated channel hopping, which can greatly improve reliability. It's true that most academic work favors a CSMA approach. I think there are two reasons for this: first, we don't happen to have a good TDMA implementation for, say, TinyOS that is easy to integrate with existing code. Second, once you go down the TDMA route it taints many aspects of your system design as it tends to violate layering between application logic and the communication substrate.

Kris also noted that a lot of the academic work in this area (including papers in this years' conference) are reporting results that are worse (or at least no better) than what the industrial solutions manage today. I can't prove or disprove this claim but it is true that the academic community is largely unaware of what the industry state-of-the-art is capable of. Kris has been trying to publish papers on their Wireless HART protocol but these kinds of papers are generally not well received by program committees. I do think it would help to have a strong evaluation-driven paper published about this protocol.

A few highlights from today's talks.

Kevin Klues from Berkeley gave a talk on TOSThreads, a threading mechanism for TinyOS. One of the main complaints about programming in TinyOS is that the event-driven programming model requires fairly straightforward programs to be broken up across a set of event handlers. Threading support would make it easier to write simple applications, although it's not clear how much benefit this will have for more complex applications with a high degree of concurrency. Mostly I'm concerned about how one reasons about interactions between threads and the ability to couple activities across them to increase energy efficiency. TOSThreads is a somewhat minimal approach to introducing threads into TinyOS, making it easy to couple threaded and event-driven code, but introduces the distinction between low-priority application threads and a high-priority "kernel" (not a distinction that we have seen in TinyOS before). I think the jury is out on whether this is the right direction but it can make writing simple programs much easier.

My former Ph.D. student, Konrad Lorincz, gave a talk on our Mercury system, which manages energy and radio bandwidth for a network of wearable sensors being used in neuromotor disease rehabilitation studies. Naturally this was the best talk of the conference.

Nithya Ramanathan from UCLA gave a talk on Suelo, which is a system for monitoring contaminants in soil and groundwater. The key challenge is detecting and dealing with faults in the sensors, especially as they are deployed for long periods of time in challenging environments. Suelo adopts a hybrid of autonomous and participatory sensing, by automatically dispatching people to check or replace sensors when data outliers are detected. The system also incorporates feedback from humans to tune the fault detection algorithm. This is a curious paper - it is not a conventional "technology centric" solution. The paper is backed up by data from three deployments (Bangladesh, San Joaquin River, and James Reserve). This is a very important problem for real, long-term sensor network deployments and needs techniques that sometimes are outside of the conventional CS literature. I'm glad this paper is at SenSys.

Rajesh Gupta moderated a panel on "Sensor Networks - The Next Ten Years", looking at the future directions for the field now that we are about a decade in. Mani Srivastava argued that we've moved away from sensing as a key aspect of WSNs, and even further from the potential to do actuation. He admonished the community to focus more on mobile personal sensing. Of course, this involves human factors, such as incentives, user interface design, and privacy. Jack Stankovic thinks the focus will morph into "cyber-physical systems", involving greater interaction with the physical world. To make this work, he argued that we need guaranteed real-time wireless communication as well as formal validation for safety. Joe Paradiso talked about sensor nets as an extension to the nervous system and asked how people will interface with them. His claim is that ubiquitous computing will arise from existing, commodity devices originally intended for other purposes. Finally, Pedro José Marrón talked about the European Cooperating Objects initiative which brings together pervasive computing, sensor nets, and embedded systems.

One thread across these position statements is that the set of open problems is very diverse - and often the solutions are not easily quantified. Perhaps one reason these problems have been less the focus of SenSys is that it is hard to get a quantitative handle on them: it's more difficult to publish papers when you can't show graphs that go up and to the right. By the same token it's hard to get a grad student to go work on a problem dealing with, say, human factors -- at least in the systems and networking community. Joe pointed out that this is more common in other communities, although the methodology (e.g., user studies) can be fairly limiting as well. As a community I think we tend to gravitate towards problems that leverage the techniques and methodologies we feel comfortable with, which in turn constrains the set of problems we tackle.

The poster and demo session followed the presentations. The demos are a real highlight of SenSys and give researchers a way to showcase real systems.

At the banquet we announced the two best paper awards. They are VTrack: Accurate, Energy-Aware Traffic Delay Estimation Using Mobile Phones from MIT and UIC, and Low-power clock synchronization using electromagnetic energy radiating from AC power lines from CMU. Congratulations to both sets of authors!
By Matt Welsh at November 05, 2009