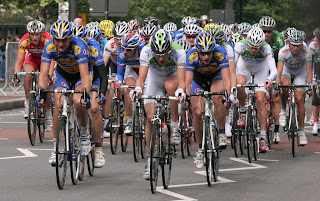 I have posted the camera-ready PDF of our forthcoming paper to be presented at HotOS 2009, entitled Peloton: Coordinated Resource Management for Sensor Networks. This paper describes a distributed operating system for sensor nets that is intended to provide the right abstractions to permit coordinated resource-management decisions to be made across multiple nodes. The key idea is that to get the best energy efficiency, it is often necessary for multiple nodes to orchestrate their roles.

The canonical example arises in a simple data-collection application, where each node locally samples data, perhaps performing some local processing, and forwards the data to a base station along a multihop spanning tree. To achieve long lifetimes, each node needs to determine how to mete out its limited energy reserves for sampling, computation, transmission, listening for and forwarding packets for other nodes, and other overheads such as maintaining time synchronization. Today this is generally done in an ad hoc manner, using manually-tuned, static schedules that fail to react to changes in the network load and energy availability over time. As a result, existing systems are typically very energy-inefficient and there is a lot of room for improvement.

Our Pixie operating system provides a node-level abstractions for reasoning about resource availability and giving applications the opportunity to adapt their behavior accordingly. The idea in Peloton is to extend this model across the network. (We named the system after the peloton in a road cycling race, in which cyclists draft each other closely to reduce wind drag and increase efficiency.)

There are three basic mechanisms in Peloton. First, nodes share information on their resource state using a global but weakly-consistent tuple space in order to promote informed decision-making. Second, we extend Pixie's resource ticket abstraction to support distributed resource allocations, called vector tickets. Third, we decouple the allocation of resources from use through a distributed ticket agent model. Nodes can delegate responsibility for resource allocation to a ticket agent operating centrally, remotely, or collectively.

In the paper we describe three application vignettes that would benefit from the abstractions in Peloton. My Ph.D. student Jason Waterman will be giving the talk at HotOS and we hope to have a prototype released this summer.